Starring samples lets you pull samples from many collections onto one page.

You can print labels for your starred samples, use them as an ad-hoc look book, or simply remember your favourites.

What are starred samples?

Starred samples are samples that you have, well, starred. Every Sparkle user has their own starred samples. You and your colleague (assuming you sign in with your own usernames) can each star the samples you want, and Sparkle will remember whose are whose.

How do I star a sample?

There are three places you can star a sample:

Each sample's page shows whether or not it is starred. You can see the sample in the screenshot isn't starred; clicking the 'star it now' link would star it. And clicking again would unstar it. 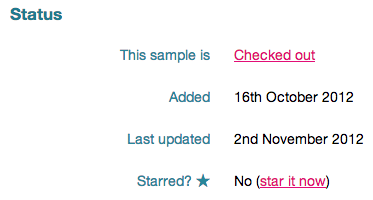 On a collection's page, hovering over each sample reveals a faint pink star. Click that to star the sample, and click again to unstar it. In the screenshot the first sample is being hovered over, and the second is already starred.

On a story's check-in page, hovering over a sample's code will reveal a faint pink star, just like on the collection page. Click the star to star the sample, and click again to unstar it.

How do I see my starred samples?

There's a new page called Stars (next to Reports in the navigation) which shows all the samples you have starred.

You can also see whether samples are starred on the pages mentioned above:

What can I do with my starred samples?

You can print labels for some or all of your starred samples in exactly the same way you print label PDFs for a collection.

This is particularly useful when you get samples back from a shoot: often the samples come back missing their labels and you want to re-print them. Just star the label-less samples on the story's check-in page and print their labels from the Stars page. Easy!

You can also use the Stars page as an informal look book, or even simply to bookmark some samples you want to come back to later.

If you think of any other uses, please let me know!

A way faster server for Sparkle